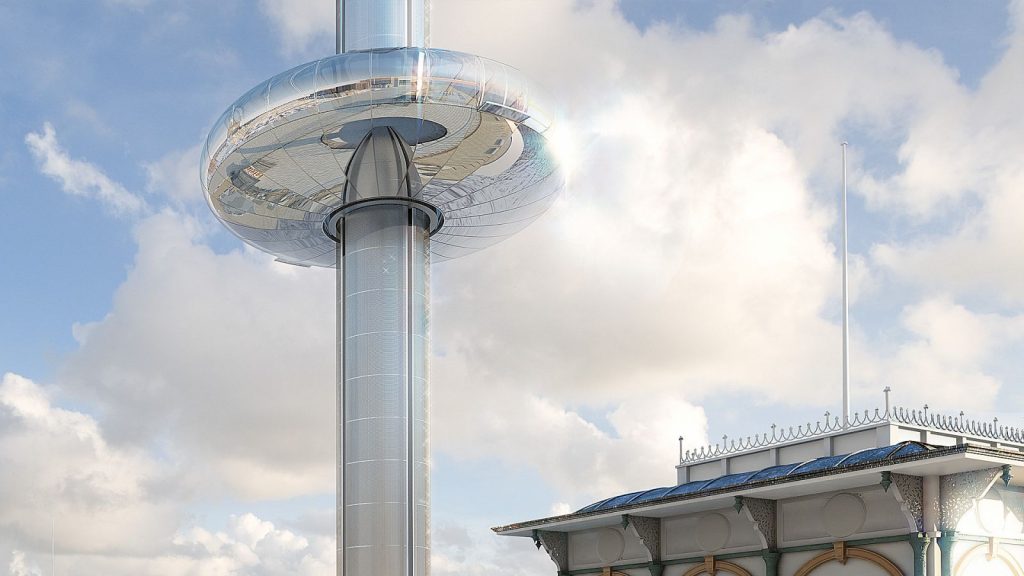 London’s range of venues, hotels, restaurants and delegate attractions is growing all the time. From iconic cultural haunts to contemporary spaces, there’s always something new to discover in the capital. Check out some of the latest venue hire openings that we’re most excited about for 2016.

If you want to get ahead of the crowds and be one of the first to use one of the newest venues in 2016 then get in touch with our team who will be happy to help.

Brighton has a reputation for building crazy structures – the Royal Pavilion in 1823, the West Pier at the turn of the 20th century – and now in time for summer 2016, what is set to become one of the country’s most famous buildings, the Brighton i360. Picture a pod on a pole and you have the right image but what you might not expect is the height.  Guests will be able to ascend what is set to become the world’s tallest moving observation town.  Reaching up to 162 meters (the equivalent of a 54 storey building) it will provide views of 26 miles in all directions.

Once open the i360 promises to provide an “exciting new beach-side flexible event space for corporate events and meetings”. The giant glass viewing pod will hold 192 people with catering for a reception, 96 for dinner and 156 people in a theatre-style set up. The beach building at the base of the attraction will hold a maximum of 1,000 people for a reception and will also divide into four different configurations. The historic 1866 tollbooth adjacent to the observation tower will hold a maximum of 45 people, while the upper esplanade will be available for 1,900 people.

Venues in the heart of the City are always popular, which is why we’re delighted at the news that Salters’ Hall is undergoing an upgrade with a refurbishment due to open in the spring. Salters’ Hall combines the rich heritage of the salt trade of medieval London with contemporary surroundings. Rebuilt in 1972 by Basil Spence and now a Grade II listed building, it is a rare example of a post-war livery building.

The imposing building will be accessed through a newly built pavilion entrance. The grand ceremonial rooms will remain largely the same, retaining their grandeur with the renovation of the fluted ash panels that adorn the walls, deep red carpets and refurbished ironmongery. The huge height of the ceiling provides outstanding acoustics and a show-stopping effect for any kind of event, from grand banquets, to awards dinners, meetings and weddings.

But what makes this venue a real gem is what’s outside, it overlooks the new London Wall Place development which extends to one acre surrounding the building. It’s a beautiful oasis within the hustle and bustle of the city, featuring water features, suspended walkways a medieval church and even a section of the actual Roman London Wall. Salters’ Hall also has it’s own secret, secluded garden; a charming space ideal for drinks and wedding receptions.

Popular Shoreditch crazy golf pop-up Swingers have found a permanent home for their ‘eat, drink and golf’ concept in a former WWII bunker beneath the City, at the foot of the Gherkin. It is due to open in early April and will incorporate two nine-hole crazy golf courses, four bars and three street food stalls in residence. ‘Crazy golf is part of British culture – there’s a lot of nostalgia attached to it because everyone remembers playing it as a child on holiday,’ said co-found Matt Grech-Smith. Swingers will have two nine-hole courses as well as a 1920s-themed clubhouse and gin terrace overlooking the golfing action. There will also be four bars and three street food stalls, including offerings from London restaurants Pizza Pilgrims and Patty & Bun. There will be a variety of spaces, including for corporate hire.

London’s oldest gothic church, Southwark Cathedral, is now available as a private hire venue for special events and drinks receptions, including parties, dinners, awards and fashion shows. All events held at the cathedral are catered for by Elior, with three-course dining and canape and bowl food options on offer. The venue can host up to 800 people standing, or dinners for 200, while the churchyard can be used for outside receptions in the summer.

And finally, we’re still waiting to find out if the rumours are true about who has bought the lease for a bomb shelter underneath Soho Square. We’ve heard that three different restaurant groups have shown an interest.  Could this be the latest shelter to be transformed, joining  the subterranean farms in Clapham that are being used to grow mushrooms, salad leaves and micro-herbs with the use of state-of-the-art low-energy light bulbs and an integrated hydroponics watering system. The resultant crops are served in some of the capital’s top restaurants, including Michel Roux Jr’s two Michelin-starred Le Gavroche in Mayfair. It seems that London’s appetite for underground venues just grow and grow and with Vaults all over London now available to hire, it’s exciting to see what new spaces are being explored.

At Evolve we work with some of the most prestigious and unusual venues available. We offer a free venue finding service. If you’d like our help finding the perfect venue for your event just get in touch with the team (email: info@evolve-events.com).

You can also follow us on social media where we regularly highlight new venues.

To see more of our featured venues visit our archived posts here.